Have a job interview, won’t be using my laptop today at all, so I’ve pre-scheduled today’s Random Internet Discovery.

My rule is that I always link to whatever Stumbleupon takes me to, but I just know that this will lower the IQ of the Internet a hundredfold.

FSN’s graphics are probably among the most worth watching in the country, because they are aped by so many teams’ own operations. Click below for a look at FSN’s new college football graphics:

Highlights: Colorado – Colorado St.
It warrants comparison not only with FSN’s old graphics…

…but the Big Ten Network’s as well (sorry for it being last year’s game):

They’re sisters and there seems to be a definite BTN influence on these new graphics. (I haven’t included Fox’s current graphics, which this is clearly an attempt to take after as well.) Perhaps more interesting is that this is more box-like than any FSN score bug since the early part of this decade, rather surprising when you consider it was Fox and FSN that in many ways gave us the modern scoring banner in the first place, yet it doesn’t switch sides depending on which way the ball is going. It’s somewhat akin to ABC’s last college football box before getting absorbed into the ESPN brand in that sense, as well as the sense that the teams are still placed horizontally from one another.

One notable feature of it is that it does not contain the name of the network. FSN’s college football broadcasts are national operations that have to go out to the Comcast Sportsnet operations, as well as a couple of others such as MSG in New York. In the past CSN in particular overlaid a modified version of its own logo over the FSN logo. Now CSN can just plop its logo in the upper right corner of the screen and plausibly pass it off as entirely its own operation. For that reason, I would not be surprised if FSN did not port this graphics package to any local broadcast of baseball, basketball, or hockey, even though their old graphics package looks rather amateur (it’s hard to think of a baseball version of this graphic anyway), unless Comcast Sportsnet were willing to come up with a similar graphic.

And while I don’t have anything against sound in score graphics in principle, this new one has a weird mechanical sound when putting in the new down and distance that’s a bit distracting. 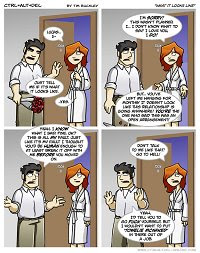 So it looks like Lucas and Kate are splitting up, rather suddenly, just as Lucas was about to tell Kate he finally does love her.

This as we, basically simultaneously (through cross-cutting), learn that Gamehaven, the store where Ethan works (well, sort of), has been sold to someone else… who, whoever it is, apparently doesn’t intend to keep it a video game store (unless there’s something I’m missing).

And of course, all of that comes on the heels of the infamous miscarriage.

In case you’re incredibly dense, all that – despite my hopes that the miscarriage would be a one-time bump in the road, and that while CAD‘s Cerebus Syndrome would continue unabated, it wouldn’t continue to descend into angst – would seem to add up to a full-fledged case of First and Ten Syndrome.

For all the hatred Ctrl+Alt+Del has engendered on the Internet over the years, mostly from a few really loud sources, it has, in actuality, been one of the most popular webcomics on the entire Internet. I believe one of Webcomics.net’s last rankings of webcomics by traffic, distilling the results of traffic-ranking services like Alexa, had Ctrl+Alt+Del behind only Penny Arcade in popularity – outpacing such giants as User Friendly, Order of the Stick, even PVP, even the web homes of newspaper comics like Dilbert and Garfield. People didn’t care that Ctrl+Alt+Del had allegedly bad art, or that it overrelied on violence because its jokes were over by the end of the first panel, or that Ethan was allegedly essentially Tim Buckley’s personal self-insertion Mary Sue. They laughed at the gaming jokes anyway, they enjoyed the wacky scrapes Ethan got into, and moreover, they followed the characters, and their trials and tribulations, with rapt attention.

The miscarriage arc changed all that – arguably going all the way back to Lilah’s announcement of her pregnancy back in February, which seemingly went against what everyone knew about the strip. There was no way – no freaking way Ethan would ever be mature enough to be a father. No way in the world. But when that point was rendered moot in the miscarriage arc, it basically broke the Internet, and turned everyone against Ctrl+Alt+Del. The strip went right from wacky hijinks, with basically no warning (and one easily-misinterpreted strip’s worth of buffer), into an angst-filled suckfest where everyone brooded over what had happened, prompting everyone to fear that full-out First and Ten Syndrome was imminent, if not already started… and back again, kicking right into a joke about D&D 4th Edition as though the main characters weren’t engaging in a round of soul-searching. Attempts to be touching and serious about the matter just fell flat on their face. It didn’t help that the miscarriage came across as a response to people’s objections to the pregnancy, as a hackneyed plot device to paint Buckley out of a corner.

And Buckley didn’t do himself any favors with his attempt to explain himself. Sure, he reassured readers that the strip wouldn’t focus on every second of angst, but that’s offset by the revelation that this was in the works at least as far back as the marriage proposal – which itself was planned as far back as the very earliest days of the strip when Lilah was introduced. Like Order of the Stick, Ctrl+Alt+Del‘s Cerebus Syndrome was planned from the beginning – only it wasn’t a transition to a coherent story like OOTS. It looks like this trip into Cerebus Syndrome will just be nothing but misfortune after misfortune – and right there, as he attempted to explain the miscarriage, and as he attempted to reassure readers the angst wouldn’t continue, he also dropped warnings that there was more to come. “I know who moves out and when”? “I know who dies and who doesn’t die”?!?

Characters don’t need to obsess over their misfortune to bring about First and Ten Syndrome (a term, by the way, I think is a bit too much of a finely-grained subset of Cerebus Syndrome for us to appropriate from Websnark, especially when it’s named after a TV show no one my age has heard of, but it’s useful for my purposes here). Recall the definition of First and Ten Syndrome:

A strip falls into First and Ten Syndrome when they take a shot at Cerebus Syndrome and miss. Rather than be a mix of the Funny and the Story with much better developed characters and more of a sense of reality, the strips fall into a suckfest of angst and misery, with bad things happening to characters we like and all sense of fun beaten out with a stick. While webcomics that fall into First and Ten can continue to have good — even great — moments, it’s an exercise in masochism to find them. (emphasis added)

I don’t read that to mean that every moment where something bad doesn’t happen to our heroes, is a moment where they whine about bad things happening to them instead. Nor should it, because a strip that’s nothing but whining has its own problems separate from whatever it’s whining about. What makes First and Ten Syndrome is the general tone or mood. If we’re not having fun anymore, if everything has to become a soap opera, if all the characters are just pathetic, that‘s when a comic can become unbearable to read and that’s when people start leaving in droves.

It’s true that Ctrl+Alt+Del still has moments when it’s fun and funny, but that arguably just makes the problem worse. It creates a dissonance between the gravity, or at least stress, of the situation and the humor brought to it. The Players and the one-shot game commentaries don’t seem to have decayed one iota, which makes it all the more odd that Ethan and Co. have very little to smile about. It almost seems that Buckley launched the Sillies in anticipation of the suckfest the main strip would become. These strips, the size of three-panel daily newspaper strips, are essentially gag-a-day exploits of the CAD characters, essentially frozen in time, with no mouths or even arms. Anyone who doesn’t like how the lives of Ethan, Lucas, and Lilah are collapsing before their eyes can look at the Sillies and pretend it’s still 2005.

It’s a good thing Buckley has the Sillies because otherwise he’d lose his one defense against the critics he already had. Buckley’s stock defense against people criticizing Ctrl+Alt+Del has been to proclaim how many more readers he has than they can ever hope to have, often in a belligerent enough tone to contribute to the hatred. But it’s a good point: Those readers have stuck with Buckley through thick and thin, often defending him against the likes of John Solomon. But for many of them, the miscarriage was the last straw, and for quite a few more of them, the recent events are the last straw for them, and there are many more last straws to come for others. I’m not among them – in fact I’m finally adding CAD to my RSS reader – but I can see it coming from a mile away.

Buckley may have a story he’s always wanted to tell from the beginning, with a path he’s always intended for it to take, but the beginnings of that story’s kicking into high gear have driven off many of his unwilling defenders. Perhaps Buckley is willing to sacrifice all his readers for his artistic integrity, but considering he’ll also be sacrificing the base of Ctrl+Alt+Del‘s financial success and the public face of his excuse to the John Solomons of the world, what will he really have left?

I haven’t updated the Web site with the new lineal titles yet; it’ll be updated by Thursday, probably Wednesday, but I need to write my NFL post first. No titles changed hands anyway, and now it’s Georgia and LSU most likely to lose their titles, though all of them are likely to retain for next week, when the titles are more likely to change hands, specifically when Georgia faces the other USC, and the first USC – off this week – faces Ohio State. All times Eastern.

It’s 2:15 as I write this and I decided to try a new place for Wi-Fi and it turns out to use Comcast to supply its connection. And Freehostia and Comcast STILL aren’t getting along. So here’s today’s strip to tide you over until I find someplace else to put it on the site.

In honor of Labor Day, this will probably be my only post of the day, but expect a deluge tomorrow.