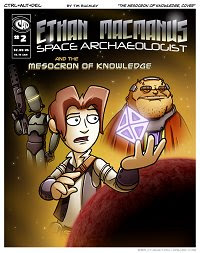 (From Ctrl+Alt+Del. Click for full-sized introductory collage.)
Ah yes. Another one of these. Is it just me, or could I care less after the last one of these and certainly after the madness we just went through?

I know Tim probably wants to bring us through a comedown after the exhausting spell he put us through for most of the time from September through November, if not longer, but color me less than fully interested. I suspect I’ll read the first couple, and if nothing happens to get me more fully interested I’ll probably just drop out until the strip titles betray that it’s over.

I was interested in this considering the first time involved a “choose your own adventure” aspect, and while it involved sending in votes via e-mail, the prospect of repeating that did get me interested enough to see what was happening with the forums. Sure enough, there is once again a forum for the actual webcomic, after getting taken down in the aftermath of the miscarriage storyline.

Also, what should we read into the fact we’ve had two of these in a year, especially coinciding with the direction the comic has taken? Is this Tim’s way of saying “let’s have some wacky fun like in the good old days!”? Is this the only wacky fun we can expect from now on?

And for all my preaching about the Angst-O-Meter, there’s still a part of me that’s waiting with baited breath to see what’s next for the “regular” versions of Ethan, Lilah, and the rest. We might be able to see the cast again just in time for Christmas, but I still have a bit of a bitter taste in my mouth from how Buckley left us hanging after all the crap he put the characters through – his last strip in that sequence left Ethan in charge of the store, which seems to demand us finding out how he deals with such a circumstance. Not to mention the whole elopement thing…

It seems more than a little disrespectful to completely shake up the status quo, perhaps more than has ever happened in the history of CAD, in a couple of strips, and then wait until the Christmas season to even come close to showing the consequences. Buckley’s way of celebrating Christmas has, in the past, pretty much consisted of interrupting whatever storyline he already had planned to post a perfunctory acknowledgement of the season, but it seems like an odd time to end a month-long period of limbo amongst CAD fans, where we don’t even know what the status quo is anymore. Which may be part of the point.

Regardless, the main purpose of this post was to show you this, which I found Tuesday at my school’s main cafeteria: 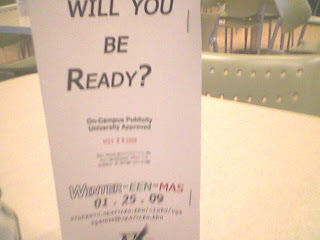 Either there are a few CAD fans at my school, or Ethan’s little invented holiday has had more real-world legs than I might have otherwise suspected…