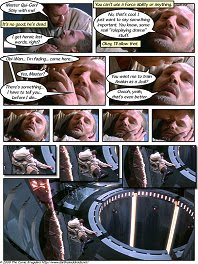 (From Darths and Droids. Click for full-sized heroic last words.)

I promise, an actual review of an actual webcomic I haven’t properly reviewed before is coming on Tuesday. It’s hard because a lot of popular webcomics are taking the holidays off, and I’m not even getting a full week with the comic I actually intend on reviewing.

But I feel I would be remiss not to note the occurance of something fans of the movies probably all saw coming: the death of the character of Qui-Gon. Perhaps unintentionally, the Comic Irregulars actually made even a cold-hearted bastard like me feel a little bit of sorrow at Qui-Gon’s death, mostly in the previous strip where Jim manipulates himself out of his last chance to save his character.

The rest of this post may come across as me being, well, a cold-hearted bastard. But of course, we know that, the beliefs of certain Christian fundamentalists to the contrary, the death of a character in a game does not equate to the death of the actual person playing him. We know that we can put relatively good money on Jim re-rolling a new character and rejoining the game. I’m not in a position to speculate, not having watched much more than the first half or so of Episode I out of the whole series, and from what I read there’s not much room in Attack of the Clones for any real new character to be introduced and heavily featured.

Which brings me to my next point: we are now entering the denouement of The Phantom Menace, and it’s interesting to note that this strip is #197. It makes me wonder if the Comic Irregulars have a plan in mind to wrap this one up with strip #200, and devote 200 strips to each movie. Based on the Wikipedia synopsis of the movie, I would imagine if that were the case, #198 would be the arrival of Palpatine on Naboo, #199 the scene with the Jedi Council, and #200 the Naboo victory celebration – although that’s still a rather cramped space, and by necessity still excludes some scenes, although aside from Qui-Gon’s dead body, there are no PCs present for the cremation of Qui-Gon.

And that’s about it, and as I am wont to do, I find myself without a real ending for this one. I could talk about how Darths and Droids as a whole has felt as of late, and how for some reason I haven’t really got much of a big-fight feel, mostly because of the head-spinning cross-cutting. But instead I just repeat: a genuine new (but really rather old) webcomic reviewed on Tuesday!