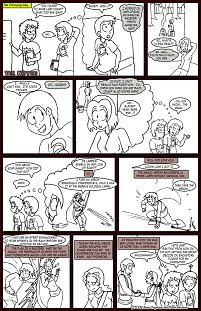 Good evening. Today I’m here to talk about a grave condition afflicting webcomics all across the land. I call it Casey and Andy Eyes.

This condition, afflicting many a webcomic but especially those drawn by marginal artists or those overly inspired by anime, has as its major symptom extremely large eyes, often taking up more than half the face, with outlines that stop in the inside. Also accompanying it is rather cartoonish-looking faces, with features formed very simply. No cure is known aside from a general improvement in art skills, either on the part of the artist or, in more extreme cases, a replacement of the artist with someone more skilled.

Okay, so the only two webcomics I’ve actually seen the condition in are Casey and Andy itself and The Wotch. And El Goonish Shive. (You might be able to stretch it out enough to include Sluggy Freelance as well.) But isn’t it odd that they share almost the exact same art style? How can this sort of weird coincidence possibly happen? The Wotch FAQ implies that Anne and Robin might not have the genders they’re portrayed as; is it possible that Anne Onymous is secretly Andy Weir?

And what the hell am I doing criticizing art styles? Am I not the guy who has long held that art doesn’t matter?

This is not a review of The Wotch in general. I might decide to write that review at some later date. But this is because I still haven’t found anyone backing my opinion and I’ve seen plenty of people hold up art as the holy grail. This is an attempt to codify what art in webcomics actually means, what counts as bad art and what counts as good art, and why the art of Order of the Stick and, in my opinion, Ctrl+Alt+Del fall under the latter.

Because I still don’t understand why CAD gets hammered for its art style. The lines are straight and polished, there’s actual shading on the characters, there’s variety in character’s noses, the hairstyles aren’t a few semi-random angular lines but often sport actual, separated tufts, not just random spikes, and the characters look reasonably like real people you might actually meet on the street somewhere. Casey and Andy can’t claim any of that. Yet CAD having bad art is a joke as old as the strip itself and no one talks about Casey and Andy‘s art. Nor can C&A claim, like OOTS or xkcd or Dinosaur Comics or Irregular Webcomic, that its art style isn’t off-putting enough to turn me off to what might otherwise be a pretty good comic strip.

But why? If art really does matter after all, what do those strips do right that Casey and Andy doesn’t? At first glance, it might look as though there isn’t really that much difference between the OOTS art style and the C&A art style. It’s not just, as it was once explained to me regarding CAD, that those comics have good stories that overcome their marginal art, because that would seem to just as easily explain Casey and Andy‘s popularity. I think it comes down to this:

OOTS, xkcd, and Dinosaur Comics all revel in their cartooniness.

They accept that their art styles will never be any appreciably different from how they started out, and so they create their own bar of realism. A comparison of OOTS to any (well, most) of the hordes of its worse-drawn ripoffs will help to show this. OOTS follows its own rules of proportion, maintaining a proper amount of space between facial features and within the face, and none of it comes off as artificial. Casey and Andy is at least as cartoony as OOTS, yet it attempts to go for a realistic rendering of its characters, and in the process falls into its own twisted version of the Uncanny Valley.

For all that people criticize it, CAD‘s much-maligned “B^U” is actually a rather ingenious way of getting around this problem. Something that often doesn’t get a lot of credit is that Tim Buckley gets quite a bit of mileage from variations on a single face. It can be used to portray wonder, anger, shock, panic, excitement, happiness, and of course, boredom. The result is that CAD succeeds in creating its own bar for realism and only needing to pass that bar on any given strip. That’s all anyone needs to ask of it. Compare CAD with Real Life, which truth be told, has its own version of B^U. In fact its art style is strikingly similar to CAD‘s (at least Buckley has real eyes with different levels of closed-ness and not just dots!), yet it has never attracted anywhere near the same level of vitriol for it. (Neither, for that matter, has PVP, but PVP characters do vary in the size of their eyes, if only a little.)

Part of this is because part of what people really hate about CAD is its use of copy-and-paste as a shortcut. Copy-and-paste can be a turn-off, but mostly when it’s really obvious. There are a couple of different things someone can do when they catch themselves copy-and-pasting. They can attempt to hide it, either by trying to introduce certain subtle or not so subtle variations or putting the focus on the content of the dialogue. Or they can go whole-hog and embrace it, often limiting themselves to one piece of art per character, in the vein of Dinosaur Comics. Both approaches have their pitfalls. The former often works best when combined with the latter, or when there are a lot of variations, or when the writing is really good (or at least controversial). (CAD falls into the “lots of variations” category.) The latter works best when you go so far as to use clip art for it, or when the art is good enough to overcome the fact there’s not much of it, or when you set the bar for detail at a point that fits the quality of the art itself. (Trying to get really detailed when all you can draw is stick figures probably isn’t a good idea.) Sadly, I’m not sure Sandsday does the best job of any of those options.

So yes, it’s very possible that it is important for a webcomic to have at least passable art, and not seem like the random scrawlings of a ten-year-old. But at least in webcomics, it’s clear that there are some exceptions to that rule, including what I like to call The Wick Scalar Exemption: if the quality and detail of the art scale with all other aspects of that quality appropriately, whether it be by reducing the quality of the features to size with the quality of the body (while still maintaining good proportions) or by mitigating the impact of engaging in cut-and-paste, even if the overall quality is completely primitive (as in xkcd), it doesn’t count as bad art for the purposes of maintaining an audience because it should achieve a level of internal consistency.

This level can seem rather hard to reach, and I suspect part of the problem people have with “B^U” is that it is ever so slightly jarring with the quality of the rest of Tim Buckley’s bodies, and gives just a little too little detail. (Similarly, I’d say Sandsday‘s biggest problem is that, for the most part, it has an Order of the Stick level of detail, but only two or three mouths per character, not to mention no hair and no skin color. On the other hand, perhaps the reason Real Life escapes the B^U charge is because it doesn’t provide as much detail in the eyes!) Certain features, such as straight lines and appealing curves, are pretty much sacrosanct, but in at least some areas of webcomic art, it’s more important to know how good you are than to try to be any better than that. Strips like Casey and Andy and The Wotch try to be better than they really are, stuff their comics with too much detail, and fall flat. The lesson of strips like Ctrl+Alt+Del is that, assuming you aren’t a photorealistic artist, it takes a Goldilocks to make an appealing webcomic – you have to get the balance just right, but the balance is more important that how much you stuff on each side.

And I promise that next week, it’ll be a real review of a real webcomic that won’t become a review of any of the Big Three out of nowhere.