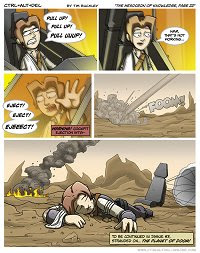 So the latest “Ethan McManus: Space Archaeologist” storyline is finally over, and I’ve gone back and read through the whole thing.

In light of recent events in the main story line, Ethan’s characterization in this story is rather interesting.

First of all, the decisions made by the CAD fans are themselves rather interesting; the first decision was between skipping out on a bill for destroying another clone when coming out of his own clone vat, and simply negotiating for a solution. Now, the Ethan I know, at least from the first story, would probably skip out on the bill, but the fans voted for him to try and negotiate on a solution (which led to him hitting on a robot), and I can’t help but wonder if that affected his characterization for the rest of the story.

First, Ethan is far more talkative than I would normally perceive him to be. Of course, one of the knocks against CAD is Buckley’s penchant for loading up his panels with dialogue, but even when the real Ethan talks a lot it tends to be in relatively simple terms. Here he lays on the exposition with the best of them. And when he needs to, he’s rather combative and can lay on the bad puns. For once I could actually see how Ethan could have wound up in the job of an Indiana Jones ripoff. (IN SPACE!)

In the latest news post, Buckley notes he was shocked that, “given Ethan’s broken arm and general ineptitude,” the fans would (in the last choice) vote for him to sneak out of the mercenary ship on his own rather than wait for his helper robot. I suspect two factors went into the decision that Buckley didn’t plan for: the fact that, with his “general ineptitude”, Ethan himself would probably fight it out… and paradoxically, the fact that Ethan didn’t really show much of that “ineptitude” over the course of this story.

Granted, it’s been a while since I’ve seen any other version of Ethan, and negotiating with people who want to kill you and engaging in an expository conversation in a sci-fi setting don’t necessarily translate to playing video games and dealing with customers, but it’ll be interesting to see if this presages the arrival of a more “responsible” Ethan when we return to the main plot, perhaps one cooked up in response to some of the CAD haters’ complaints.

Though depending on the execution, that could move the Angst-O-Meter up or down…