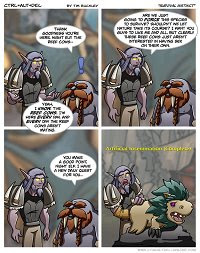 If you’ve been following just the main comic of Ctrl+Alt+Del, something happened that you may have missed.

Back in November, I expressed my amazement that some people were organizing Winter-een-mas festivities at my school, complete with visual evidence. As it developed, the promotion for it became even more pervasive than it was when I posted on it, going from a simple table setpiece to include a massive banner hanging over the lobby of the Student Center (both of which are common with various things school clubs do around here), advertising an entire week of festivities (including weekends) on school property. If I still lived in the dorms it might have been a major event around here.

Except in the place where it got started.

Winter-een-mas used to be a big, multi-week deal, where Ethan would go on positively epic escapades; last year he met with the Gods of Gaming and the strip moved up to a once-a-week schedule while we were subjected to a parable. This year? Nada. Recognition of Winter-een-mas at all was relegated to the Sillies, which tend to update in one huge batch once a week despite being presented as daily, and which seem to have been almost abandoned entirely. The main strip continued apace as though nothing was happening, albeit focused on Ethan and the rest of the cast, as they prepared for the store re-opening and saw Zeke coming back to “life”. It seems to back up my contention that the Sillies were intended as a respite for people who didn’t like the strip’s Cerebus Syndrome and wanted the “old” CAD back.

Ctrl+Alt+Del is growing up (as is Ethan), and as it does so, it’s putting away childish things like Winter-een-mas. The strip is six years old, and if Ethan was mentally six when the strip started, he’s twelve now and maturing (whatever that word means) fast.

Ethan and Lilah are officially married now, although they’re planning a show wedding for everyone else, while Ethan prepares for (and dreads) GameHaven’s reopening under his leadership. Running a video game store involves a lot of responsibility, and for Buckley, getting Ethan out of that responsibility isn’t as easy as a miscarriage, and necessarily would involve gaining new insights into certain characters, including Ethan. So unless any “need” to have Ethan constantly avoid responsibility were to be brought into sharp focus within the strip, there’s no getting out of this one. Ethan is going to have to take some real, long-term responsibility and undergo whatever character development that involves.

Now admittedly, Tim Buckley’s track record with handling real change isn’t good, and in fact Ethan’s possession of the store came at the end of a lengthy storyline that, until that very last strip, looked to be mere sound and fury signifying nothing, except Ethan and Lilah’s elopement. Tim has plenty of outs: Ethan could get off to a terrific start with the help of his congregation, and/or leave much of the day-to-day operations to Lilah or Lucas. But call me naive, but I suspect not only is this the real deal, and will avoid going towards First and Ten this time, but word of the elopement is going to leak out and certain people will not be happy.

I’d be perfectly happy to eat crow if we go back to the main cast and find the store running better than ever and Ethan and Lilah’s second wedding coming off without a hitch. But between the mere fact we’re having a second wedding, and the passing by of Winter-een-mas… I can’t help but think Buckley’s critics may be the ones forced to eat crow, and Ethan is about to go through some real adversity.

It’s not going to be Order of the Stick, but it’ll be a big improvement over what Buckley’s critics think the strip is. I hope they’re watching. I know I will.