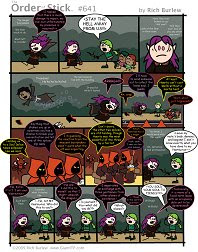 I’m going to try and be quick with this.

Because it was a makeup for arguably not having a February OOTS post, I don’t consider the post I made when V took this deal to be an official OOTS post for most purposes.

That means I still owe you a March OOTS post, and that will probably come when the next strip does.

But I do want to give a cautionary tale to Aspiring Webcomickers Everywhere, regarding the previous strip, which I don’t think Rich thought through.

OOTS doesn’t accompany its strips with posting dates, which means later archive bingers won’t realize the connection to March. More to the point, now and in the future, non-Americans won’t get the joke at all. And it doesn’t help that, legibility reasons or no, the Arizona State Sun Devil is misidentified as simply “Arizona”.

The moral: Use topical strips with caution.

Sometime next week, you’re going to get a sports TV graphics roundup and review.

Because SportsCenter is overhauling its graphics package.

I may wake up slightly before 6 AM on Monday just to see it debut. I wonder if this is a sign that SportsCenter and other ESPN programs are (finally) moving to the graphics package that has populated ESPN’s actual sporting events since the debut of MNF on ESPN (and been ubiquitous on them since April 2007)?

Or… is it an entirely new graphics package, and I need to watch baseball’s Opening Night the previous night to see if it makes its “real” debut there?

The topic was Tiger’s win at the Arnold Palmer Invitational. Bob Ryan opens the discussion by saying it’s his second-best win behind his first win at the Masters! Kevin Blackistone slides it behind only his win at Pebble Beach nine years ago.

Then after Jay speaks, Woody Paige chimes in: hey, remember his last win? The one he won in a 19-hole playoff on one leg at the US Open? And Ryan quickly slides this win below the US Open win and Blackistone claims Woody’s somehow agreeing with him even though he still has only the Masters and 2000 Pebble ahead of this one, not the Open.

It’s still absurd to rank it this high when it’s really a stage-setter for this year’s Masters, though. It’s like after the Super Bowl when it seems like everyone leaps to call it the Greatest Super Bowl Evar(r) every single year.

(Does this mean the end of Classic as an overflow channel?)

…that the top 16 entries in Yahoo Sports’ Tournament Challenge ALL have North Carolina winning it all? I should have picked UConn so I could beat them all. I still wouldn’t place first, but still.

And how bizarre is it that, in a year in which I picked almost at random, I’m in the ninety-seventh percentile of Yahoo rankings? Or that even with that, I’m still not in the top 65,000? That means they got something like over two million entries, and they’re not ESPN. Ouch.

Refer to this post if you don’t know what this is about or to catch up on the rules.

This year, only three conferences produced multiple bids to the NCAA Tournament: the MWC, A-10, and Horizon League. These conferences are guaranteed one spot each in the Mid-Major Conference.

Three teams reached the Sweet 16, all from different conferences. Of these, Gonzaga and Memphis did not come from a multi-bid conference, while Xavier did. From the Mountain West Conference, neither team won its first round game; from the Horizon League, one team won its first round game while the other did not. Utah and BYU split the season series, but Utah won the conference tournament and BYU, obviously, did not.

This leaves three spots in the MMC to be determined by my discretion, with no conference restrictions.

Without further ado, the eight members of the 2008 Mid-Major Conference:

Davidson and Creighton were the only teams to make the NIT second round from conferences that didn’t qualify teams automatically, and both lost. After being passed over under the Northwestern State rule last year, Siena was a shoo-in for the MMC this year with a #9 seed and first-round tournament win. That left Western Kentucky, which won a first round game, to compete with VCU, Utah State, and Northern Iowa for the remaining spots. Northwestern State rule aside, I decided to push the Hilltoppers through because of their seed, and the remaining spot went to the team I most associated with an at-large bid opportunity.

I went into Spring Break intending to get a lot of stuff done. I’d been building a backlog of things I wanted to do and I wanted to clear as much of it out as possible.

And I did get a lot done. Not as much as I intended, but I intended to do a LOT.

But I also left the spring break thinking about maybe trying out xkcd‘s 28-Hour Day at some point over the summer.

With my tendency to stay up later at night than I ever thought I would, it might turn out to synch up with my internal body clock better than following the earth’s rotational cycle.

(For just one week, of course. Not for a long period of time.)

When I started Da Blog, I mentioned that “you won’t see me get a MySpace or Facebook account” and I lumped in MySpace and Facebook along with blogs as things I didn’t think there was anyone left in my age group who didn’t have them.

Since then, I’ve seen a number of blogs shacking up with MySpace, Facebook, and Twitter and reposting the posts that are already on their blogs there. I’m wondering, why? You already have an RSS feed, why do you need to put alerts of new posts on Twitter as well? Why repost your blog entirely on MySpace or Facebook and obviate the need for people to visit your blog and view your advertising? If you really want to be on MySpace or Facebook, why not just put your blog there in the first place

I had the same questions shortly after getting my first webcomic-post-created bump, when someone created a feed for Da Blog on LiveJournal. I never really got a satisfactory answer – seems the creator wanted a one-stop shop to read Da Blog and his other feeds from his LJ friends list. I’m not sure if even that applies to MySpace and Facebook (or, to a lesser extent, Twitter).

Well, I think I’ve found the reason why people would dive in to that sort of thing voluntarily: to aid in blog promotion.

The friend function on MySpace and Facebook has become a complete misnomer grossly deprecated from its original function. Probably the vast majority of “friends” aren’t. Celebrities accept every friend request under the sun, allowing any fan to claim their favorite celeb isn’t just someone they really like, they’re BFFs! On the flip side, small-time bloggers and other attention whores (and I use that term to describe a lot more bloggers than the community would like to admit, and I’m one of them) beg for friends on the off chance that people will discover them off their “friends”‘ friend lists. Never mind that when you have 600 friends, they become meaningless. (Some people may not even know who the people are who they apply to be friends with.)

Friends have become trivialized, but their organization hasn’t. The problem with using MySpace and Facebook to pimp your blog is the hassle of applying for friends, and even more so, dealing with friend requests. (One or both may allow for en masse friend approval, without looking at the individual requests, but it’s not a networking site that wants to fight the trivialization of friends. Or spam, for that matter.)

Twitter is better for such a purpose, since “friendship” isn’t reciprocal – there’s a distinction between “following” and “follower” – so people can link you just by announcing they’re following your tweets, and you don’t have to do anything. So between the potential blog-promotion possibilities and my own growing interest in its original purpose (I’m always doing something, ideally), has actually made me seriously consider becoming the latest to follow the crowd and hook up with Twitter.

Oddly, perhaps the major reason why I have some misgivings is the tagline at the top of Da Blog: “The ONLY blog written by Morgan Wick.” That reflects, in large measure, the multi-blog nature of Da Blog as I see it, obviating the need for me to take part in any other blogs. It was originally intended as semi-ironic, since it would be pretty unlikely I (or anyone else) would need any other blogs anyway. But not only has a growth of alternate platforms increased the possibility for things that could be considered “second blogs”, if I were to join Twitter it could easily be considered, despite its restrictions, a second blog for me – if it didn’t even supercede Da Blog.

Besides, I’m better than annoying everyone with what I’m having for dinner.

At least I’m not violating my first-post promise… if only because I’d rather avoid the hassle of coming up with and enforcing a friends policy.

So it’s Reboot the Universe Week at Irregular Webcomic! This is now the fourth straight strip with this same last panel.

Presumably we still have three more to go, including the biggest bang ever courtesy of the Mythbusters theme.

Curiously, we don’t know yet whether all these diverse elements create one universe or a “multiverse” of sorts. It would seem to make sense that if the universe had to be destroyed multiple times, it needs to be created multiple times, but a lot of these universe-creation efforts seem somewhat inconsistent.

And… that’s about it. I just thought the repetition of final panels was interesting. And it is a pretty plot-important week.

When you think about it, almost every number is interesting!