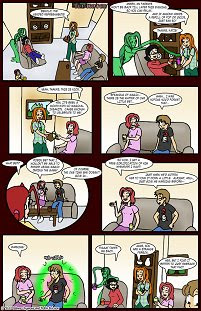 First, for the thumbnail I’m following what I call the Dresden Codak rule. When I reviewed DC the front-page image was a notification that the strip was on hiatus. This strip’s similar hiatus notification has a stronger case to be made the thumbnail, in that it will probably remain in the same spot in the archives rather than a netherregion.

Second, I hate to say this after a month without reviews (only “Webcomics’ Identity Crisis” and the state-of posts), but I’m not doing a webcomic review this week. Or next. When next a webcomic review appears – I don’t normally announce my webcomic reviews in advance, but – it will be on Sluggy Freelance, since I have plenty to say about Sluggy the site and Sluggy the comic and it should just flow onto the page (to the extent I may do it next week and leave the week after that empty). After that I’ll do the March OOTS post. (No, yesterday’s post doesn’t count.) I’m skipping next week because I have a paper I need to get cracking on for a class and working on Da Blog has really cut down on my time (and as I’ve said, I’m finding myself with less time than you’d think). I still have more posts I’d like to get through the pike than I really know what to do with.

The reason I’m skipping this week is a bit more interesting.

I never really wanted to review The Wotch – it’s no Penny Arcade in terms of popularity, and the stereotype is that strips where people flip genders a lot appeal mostly to people with a fetish for that sort of thing – but I felt that, since I used it as a thumbnail for a non-specific webcomic post, it was too much of a bait-and-switch that it wasn’t an actual review, and so I owed it to The Wotch to do an actual review some day. But even at the time, I said that “I might decide to write that review at some later date” (emphasis added).

As it turned out, the strip I used for that thumbnail was part of the denouement of that particular chapter. So as I followed along with the strip in preparation for reviewing it, I sat through maybe two strips of actual plot (bracketing fillers), several state-of strips, and a quick, three-page, probably-unrepresentative gag before the strip went on hiatus. Which, incidentially, was in late February. Which left me somewhat surprised the strip has been able to bang out three chapters a year at a once-a-week pace, considering I was around for what should have been half a chapter.

So I don’t have nearly enough information to write an informed review, and I don’t feel strongly enough about it to go trawling into the archive as a stopgap. I’m not going to wait around for several months more following a comic I wasn’t particularly interested in reviewing in the first place, so I’m cutting my losses and removing The Wotch from the “tryout space” of my RSS reader. So this week, when I had been planning on maybe reviewing The Wotch, since I didn’t feel I was quite ready to review either of the other two comics in the tryout space, I’m just leaving blank instead. (I don’t feel I have quite enough material to write a review of Sluggy right now; as soon as next week I think I would. Which sounds ridiculous now, considering I arguably had less material to work with from The Wotch.)