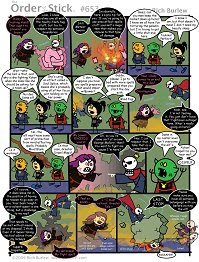 (From The Order of the Stick. Click for full-sized end of the line.)
Technically, I still owe you an OOTS post for April, and this doesn’t count. But it does give me some ideas for a full-fledged OOTS post, which I was planning to have next week… assuming I can get a post I was planning for this week in by then. Because it’s been too long since I reviewed another webcomic blog.
Yes, Blogger-in-Draft is still making it impossible to upload images and forcing me to go back to old Blogger (screwing people who had made Draft their default dashboard and can’t go back no matter what they try), why do you ask?
But anyway, since I normally make posts on Big Events and the forums are down as usual, I might as well make some comments here.
First, reflecting back on my original post on the splice, for two reasons. First, Burlew did a good job of keeping us on our toes with the splice. I started out thinking that, despite the power level, V had a good chance of hanging on to it into the next book; then it was revealed that V would lose splices one at a time and I thought that meant it made the most sense for them to all be lost within the current book; then plotlines started getting used up left and right, and things kept happening to V and he never lost a splice to them, and I started thinking there wasn’t enough room for two splices to be lost in the relatively small time left in the current book. Then he decided to take on Xykon.

The pattern established with Haer(t)a seemed obvious: use an epic spell that would see the spliced caster appear “in the background” behind Vaarsuvius, then that caster would have their splice lost. While all the plotlines were being wrapped up, V had already used Ganonron’s epic spell, so every time something happened that might ordinarily cause a splice break, I figured that meant V had one more teleport in her. And there was enough portent in V’s decision to run to Xykon to figure that last teleport had arrived.

It would have been bad enough, in my view, for V to lose Ganonron alone and thus the ability to teleport away from the scene of the crime. I can certainly see the logic in Haer(t)a being the only lone splice lost – to establish that a splice could be lost at any time, to take her spells off the table, that sort of thing. But the fact that Jephton was not able to get off an epic spell doesn’t sit well with me, and tells me that either Rich couldn’t find a place for a third epic spell (a second “Epic Teleport” doesn’t count) or changed his plans at some point after #643 – possibly, given the suddenness of the last two strips, just lost patience with the splice. Certainly I could have seen Ganonron lost but Jephton able to get off an epic spell against Xykon before he was lost – it seems Rich couldn’t figure out what to do that would be big enough to give that shadow shot. (Some forumites suggested Jephton be given a completely ineffectual joke spell, though, so even that’s not a show-stopper.)

Second, after the previous strip I figured that since Xykon had just fired off two Energy Drains and might have more in store, severely weakening the splices (seriously, if Jephton lost all his epic spell slots after the first, he might well be lower level than V after the second) the prudent thing for V to do was get out while the getting was good. Therefore, I figured something would happen to prevent V from leaving. Survey says… not really. I can see going for the Bixby’s Hand after the energy drains, but staying in the game after Xykon neutralizes even that? With your next move being a simple Disintegrate?

It actually makes an odd level of sense, but in a way I doubt Rich intended. While it’s possible that either V, Rich, or both weren’t thinking the circumstances through (less likely than you’d think in the former’s case with two more clear-thinking souls along for the ride with the most to lose), I prefer to think that this is V’s pride and hubris rearing its ugly head again. V really does believe “my power… EXCEEDS yours!” and he can still defeat Xykon with brute force even after evidence comes up to the contrary, only realizing the prudency of retreat once it’s too late. (That pre-current-book V’s style of pounding on a problem until it falls fits the situation is an idea worth considering as well.)

I’m holding off on most of my future predictions until next week, and even then I’ll want to hold off on some because I have a between-books state-of planned for when the current book ends. But for now I have only this: I think we’re more than set up for the remainder of the book between any Team Evil-Vaarsuvius discussions and any discussions surrounding Roy’s resurrection. We’re already about halfway through the “20-strip cooldown period” I’ve identified at the end of each book. I can easily see three strips or more to wrap up the battle and have some catching up to do and tie up loose ends here, plus at least three strips to cover Roy’s resurrection, throw in the usual splash page at the end – that’s seven right there, out of about ten – and since we haven’t seen any of the Linear Guild in the book so far, if they’re to have any real substansive role in the next book – and it’s becoming a fairly firm consensus they will, for reasons relating to Elan’s and Nale’s family – or just appear in this one, they better show up soon.

And if there’s any importance to Roy meeting V’s “subcontractors”, could it be the knowledge that V could have lost them and remain trapped in Azure City, life status uncertain?

4 thoughts on “V’s first question after recovering from the shock, assuming the fight doesn’t continue: “How in the Lower Planes do you know about soul splices?” Hey, now that the robe’s red and eyes’re normal again, maybe Redcloak recognizes her as an OOTS member.”