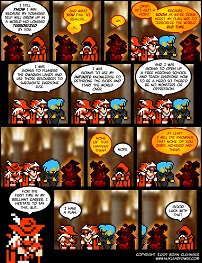 (From 8-Bit Theater. Click for full-sized inevitable hopelessness. Which is a good way of describing 8BT itself, actually.)

So, it’s been long enough. After a brief stint with doing actual webcomic reviews, I got bogged down in all sorts of other stuff, and so I haven’t been doing actual webcomic posts for a while. And it’s high time I sat down and got back into the thick of things. Especially given how close I’ve been coming to putting something off to the point of eternal regret.

Because I never got around to reviewing 8-Bit Theater.

That may well be my eternal shame as a webcomics reviewer. In all my posting about identity crises and sports ratings and April Fool’s jokes and global warming series and missing sports graphics and stressful classes and personal neuroses and complaints about Draft Image Upload (very very close to becoming irrelevant by the way) and overload of side projects and other obsessions, I never got around to reviewing 8-Bit Theater.

I don’t mean to say it’s the greatest webcomic in the history of the universe. I don’t even like 8-Bit Theater. But after I used Komix to subscribe to 8BT with an eye towards eventually writing a review early this year, and seeing it move to a new system and something vaguely resembling an actual RSS feed while Komix’ proprietor was on vacation, and putting off writing the review for one distraction after another, I’m not going to let 8-Bit Theater, which ranks high among the ranks of the Tier 1 comics, pass into oblivion without my having reviewed it.

What’s more, because I’m catching it as it makes its big finish towards the end, I may be getting an unrepresentative sample. One thing that struck me as I was reading it day-by-day originally is that it seems to leave off one plot thread and start up a new story so fast you’re wondering how we got from there to here. When Black Mage says in a recent strip that “this whole goddamn adventure has been nothing but pointless build ups to pay offs that never happen“, most people can’t help but think there’s an element of truth to it. But as I start to re-read it I can’t help but wonder if this is actually cross-cutting between different groups and plotlines that makes sense in context. Still, it can come off as complete nonsense to the uninitiated. Even within a plot, there’s a lot of hopping around back and forth between different stati quibus, and keeping track of what’s going on can be especially difficult when reading it one page at a time.

So, what else? Well, um, 8BT is interesting in how it structures its updates. It uses the one-page-at-a-time approach of Girl Genius and Gunnerkrigg Court and doesn’t really ever stretch it out like Order of the Stick, yet it’s better than the first two at making each update stand out in its own right.

8BT reminds me of xkcd in a way in that there’s not much I can say about it. Reviewing the updates I originally followed “live” in an archive binge leaves me without much to say either. In fact 8BT leaves me questioning my own ability to go on with my webcomic reviews, just because I’m having trouble properly analyzing it, and that may say a lot about 8BT in and of itself. The characters almost seem to be interchangable cyphers for the most part, without much in the way of distinguishing them or making us care much about what’s going on, which makes it all the worse that it can be a little hard to keep track of what’s going on even when you read it all at once. (With the possible exception of Black Mage, and I swear and hope to God I’m not just saying this to echo what Robert A. Howard said recently, which I just read as I write most of this.)

Oddly, 8BT may have actually been a bit funnier in its very early strips, and maybe a bit more distinguished in its characterizations. Some of its jokes are actually funny, and the strip managed to balance a gag-a-day format with a continuing story, though it did have a habit of making the sort of joke way too endemic of sprite comics: “Look! I can’t draw and sprites have limitations so here’s an explanatory caption to show what this is supposed to be!” And everything tended to be all over the page with side jokes all over. As for characters, Black Mage was the evil one, Fighter the dumb one, Red Mage the munchkin, and Thief… well, here’s where the trouble began, probably. Thief was basically a storehouse of all the jerk-y traits the other three didn’t have. He’s supposed to be greedy and hoarding gold, but that doesn’t really tell you much. They were all fairly one-dimensional (as characters and visually).

It’s easy to see why Red Mage and Thief got mixed up, since they were basically “someone who wants more stuff” and “someone who wants more gold”; Fighter out-and-out decayed, becoming less and less of a complete buffoonish dumb idiot and starting to show slightly more intelligence whenever Brian Clevinger needed a line that didn’t make sense for the other three to say for whatever reason. Then occasionally trying to run too far the other way to compensate. So they all became, basically, “we’re jerks and Black Mage is pure evil”. Even Fighter became too consumed by his stupidity to be an effective counterpoint to the others’ jerkness, and leaned more towards the other Light Warriors than, say, White Mage in those instances when he snapped out of it. One wonders if Clevinger made him “he’s really a good guy – but he’s friends with pure evil because he’s too stupid to realize otherwise! Get it? It’s funny!” in a last-ditch effort to maintain the distinctions, the same reason Red Mage developed an odd cross-dressing fetish (which just made Thief look even more generic).

In fact, let’s save you the trouble of actually having to read 8BT yourself, as here’s a pretty good summary of the strip:

I guarantee you that strip is more funny than almost all of 8-Bit Theater, and probably a lot better as well.

In my full-fledged Darths and Droids review I said it was no insult to call 8-Bit Theater a poor man’s Order of the Stick. I see now I was wayyyy too kind. 8BT isn’t even as good or compelling as Bob and George, which may be partly the result of having characters that should by all rights be the villains as the protagonists to the extent that you hate them more than rooting for them. Not even Ethan from Ctrl+Alt+Del is as bad as these guys! OOTS‘ Belkar is, but you root for him more than you root for even Fighter! Of course, maybe the real problem is that the former has Lucas and Lilah while the latter has the rest of the OOTS to balance them out, while the closest thing to balance the Light Warriors have, White Mage, hates them as much as anyone else and only pops in and out. Another possibility: Belkar is funny when he’s doing evil things while the Light Warriors are funny when bad things happen to them. (To be honest, probably 90% of the actually funny jokes in 8BT are just Fighter being stupid.)

I’m not sure why people attack CAD so much or why John Solomon went after B&G when 8BT is far more deserving of the vitriol. I want to make clear: this isn’t an anti-sprite-comic review. I read and enjoy Bob and George (which, having ended, is ineligible for a review) and I don’t even see sprite comics as a crutch for an inability to draw, as Dave Anez and Clevinger have mad Photoshop skillz to tweak their sprites the way they want to. The problem is that in Clevinger’s case, he seems to have put too many skill ranks in those and not enough in “being funny” or “having a decent story”, and Anez has a few in at least the former. Like CAD did for video game comics, 8BT started a trend (well, furthered the one started by B&G, much like CAD accelerated the trend started by Penny Arcade) of bad sprite comics by people who only see a way to get into comics without having a lick of art skillz, or even a reason to get into comics. Unlike CAD, I can’t discern Clevinger’s secret to his success, and my leading hypothesis is a bit distressing: geeks like the kind of non-sequitur nonsense Clevinger specializes in. If more CAD strips were like the Chef Brian strips it might be as beloved as xkcd.

On the other hand, if I find out 8BT in any way inspired The Order of the Stick, then all is forgiven. Though I’ll still rib Clevinger for Rich Burlew showing him how it’s done.

2 thoughts on “I finally get to pick a fight with an established webcomicker! Because slamming Dresden Codak wasn’t as fun.”