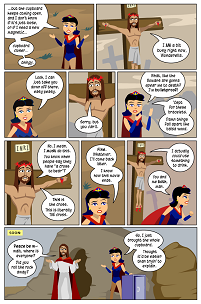 (From The Non-Adventures of Wonderella. Click for full-sized resurrection interruption.)

For whatever reason, despite – or perhaps because of – their popularity in comic books and among nerds, superheroes are not that popular of a subject for webcomics.

Oh, there are webcomics, even reasonably popular ones, about superheroes; it’s just that none of them have ever reached the level of popularity of a Penny Arcade or xkcd. Moreover, even fewer play the concept entirely straight; at the least they tend to be painfully self-aware of the tropes of the genre. Either it flirts with other genres, deconstructs the trappings of superheroes, or is constantly joking about those trappings, perhaps all of the above.

So perhaps it’s not too surprising that perhaps the most well-known superhero webcomic is a straight-up parody.

It’s kind of hard to describe The Non-Adventures of Wonderella, and not because it’s just completely random. No, Wonderella is hard to describe because it’s undergone considerable evolution over the course of its run, without really changing much at all. That may or may not make any sense, but it never underwent anything remotely approaching Cerebus Syndrome, yet the characters and nature of the humor underwent considerable evolution regardless.

Wonderella is a superhero who, well… does anything but go superheroing, and she’s not even above doing a little of that, though rarely in the typical fashion (I can probably count the number of times she’s actually depicted on-panel using her alleged powers on one hand). She doesn’t particularly care much for it either, preferring to lie around and get wasted, and often borders on the sociopathic. The only person she doesn’t completely mistreat is probably her sidekick, although her relationship with her archvillain can take on vaguely romantic overtones. At least in the strips that made the comic popular, she’s also incredibly entitled, is only concerned with how much she can milk her brand for, and is utterly ignorant and uncaring about anything that happens in the broader world, especially outside the United States… in other words, she’s what a conservative thinks a liberal cariacture of an American is. As such, many of these strips take on a rather satiric tone.

I speak of “the strips that made the comic popular” because I’ve noticed a definite shift as the comic goes along. Now a good number of the strips that come along are parodies of other things. Wonderella’s sociopathy is still there, and she still tends to be rather ditzy, but seems to be considerably toned down, and certainly seems to be less often the focus. I’m also seeing something closer to straight-up superheroing cropping up more often. There are some similarities throughout the run of the comic, especially Aaron Pierce’s penchant for rather surrealist humor, which could take the form of a seemingly stream-of-consciousness procession in the earlier comics, and all in all the shift is probably imperceptable if you’re not looking for it, but it’s definitely there.

Wonderella is funny enough that I originally intended to write this review to make clear that, despite what may have come across in some of my past reviews, I don’t have anything against pure humor comics without much story, so why can’t I get excited about it now? It’s not that it’s bad, or even that it’s not good. Perhaps it’s just that it’s not consistently funny enough, not consistently laugh-out-loud funny, to maintain my interest, especially considering it updates only once a week, meaning it has the same problem that befalls all comics with that infrequent an update schedule (no jokes about Order of the Stick, please). You might think that means it doesn’t take that much additional toll to add it to my RSS reader, but what it really means is that I’m not really receiving enough bang each week to really justify it.

Or perhaps it’s the fact that I just can’t get into the newer comics the way I could the old ones. That may sound like I’m accusing Wonderella of jumping the shark, but honestly I can’t really detect any decrease in quality to go along with the shift. But it no longer seems like Wonderella is the focus of her own comic, but more a conduit for the larger sorts of stories Pierce wants to tell. A lot of the time in the parodies, you can swap out Wonderella for someone completely different and it’ll read much the same way. It’s possible that, like many webcomic artists, Pierce ran out of stories to tell with his original concept and branched out into whatever stories he wanted to tell that he could shoehorn Wonderella into. Which I guess really does sound like I’m saying it’s jumped the shark, but I really do feel like the more recent comics haven’t really slipped that much from the older ones, though it is the case that Wonderella is less interesting as her sociopathy becomes de-emphasized. Still, the newer comics just aren’t quite my cup of tea.

Would I have put Wonderella in my RSS reader back when Wonderella’s sociopathy was still the focus? Maybe, but the fact remains I can’t get into it now. Wonderella has lost its heart, the reason for its appeal in the first place, and what’s left is something of an empty shell. Perhaps that’s something you might still find funny, but for me there’s nothing there, nothing to make any sort of impression on me, certainly not coming once a week.