And the web site has been updated accordingly.

New SuperPower Rankings, of course, and an update on the Patriots’ blitz through the entire NFL.

The Upset Special for the week is Miami beating the Bengals.

Can someone explain to me why Atlanta is favored over Seattle, even with the Seahawks having nothing to play for?

I was going to add something else really insightful, but I forgot it. But here are the teams that could get each pick of the NFL Draft, in selection order for all rounds. I’m discounting strength of schedule because that’s too hard to look up and I’m not sure of the formula anyway.

I only had to make decisions on two races, and only then because the vote (two for each match) split.

#5 LSU v. #8 Oklahoma (Sugar Bowl)
The mass of red in the stands of the Cotton Bowl turn the tide when a late comeback attempt by the Hokies ends just short of the first-down marker on fourth down. But what relative home field giveth, it can also taketh away. The #3 and #12 offenses in the country promise to light up the scoreboard – but not if the #9 and #20 defenses (the latter of which gives up the third-fewest yards per game) have anything to say about it. LSU relies on its #12 rushing attack, but it will have to contend with the #11 run defense of the Sooners. Oklahoma is more balanced, with a #18 rushing game and #26 passing game, but LSU is #18 and #17 at stopping the run and pass, respectively. It’s like they’re set up to counter each other!

#2 Georgia v. #11 USC (Rose Bowl)
Ohio State gets a surprise from a Georgia team that comes ready to match them on defense, as the Buckeye offense is exposed in a tight 7-6 Georgia victory that ends on an interception by the Bulldog defense snuffing a late comeback attempt. Things don’t get any easier for the Bulldogs, as they now have to travel far from home to play a team that some say should be seeded a lot higher. USC’s defense is not much worse than Ohio State’s – fourth in points, second in total yardage, eighth in passing defense, fourth in run defense – but it also does not have that great an offense, and if Georgia can handle Ohio State they can handle USC. As with Ohio State, USC’s offensive strength comes on the run.

I’ll be updating this post throughout the day and not creating any new posts. New changes:
-A Browns loss cinches up the division for the Steelers. And they’re losing at the moment.
-A Packers loss cinches up the #1 seed for the Cowboys. And they’re losing at the moment. Not even Favre love is likely to save NBC.
-The Panthers are out with a loss, so Bucs-Panthers is out on Sunday Night.
I’ll report on the results as they come in. Jags are beating the Raiders which could cinch up the 5 seed. Giants are beating the Bills which should cinch a playoff spot. Saints losing to the Eagles at home.

Bills have taken the lead over the Giants.

Giants got down to 4th and G on the 1 but could not score. That’s proving to be an interesting game.

Giants just got an INT return for a TD to retake the lead. The Bears look like they will relegate the Packers to a 2 seed.

Bears knock off the Packers, so the Cowboys and Packers have nothing to play for. That means next week’s game is meaningless enough that Favre might not play, meaning NBC might shy away from it. Titans-Colts may now be a virtual lock, assuming the Titans end the day still with a shot at the playoffs.

Giants have opened up a big lead and are probably playoff-bound. Bengals knocked off the Browns so the Steelers win the AFC North.

Let’s move into the afternoon games.

Bucs behind in a tight one against the 49ers. Titans leading Jets, Seahawks demolishing Ravens.

Two games are very interesting, the Bucs and Titans games.

Jets are driving and attempting to come back.

TO on downs, then Titans pick up a first and they will keep their playoff hopes alive. Titans-Colts a good bet for next week on NBC.

Meanwhile Bucs are down against the 49ers. Not the way they want to enter the playoffs. Seahawks still leading big.

Seahawks win, and the Bucs go down despite a late comeback, so the Seahawks will get the 3.

In the AFC, Titans and Browns are tied for the final playoff spot. I’ve heard that the Titans would hold a tiebreaker over the Browns and thus would only need a win to get in. Of course, it’s against the Colts. This pick is very tenuous, and there’s still a chance that NBC will spring Brett Favre love on us, but there are two things against that: 1) The Packers are in the playoffs, so unlike last year this is not going to be Favre’s last game period, and 2) The Packers aren’t playing for anything, so expect Favre to get limited playing time. 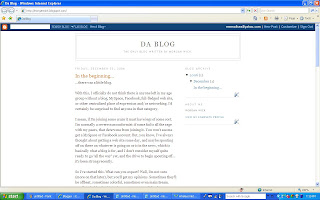 One year ago today – December 22, 2006 – I huddled up in the shadow of a bus stop, cracked open a laptop, and wrote the very first post in the history of Da Blog.
At right is how it looked that first day. As you can see, it didn’t look much different from how it looks today. Of course, the sidebar was a lot smaller and less cluttered than it is today, but if you look around, both of the elements on it are still on the sidebar and will probably stay there for some time in the foreseeable future.
For weeks I was the only person to see Da Blog. Slowly, the audience grew, and more and more people discovered what I had to say about… well… just about anything. Once, I got excited to see even one or two people read Da Blog in a single day. Last Monday, a whopping 25 visits were registered by SiteMeter. December 10 saw an incredible 45 visits.
Okay, so that isn’t really all that much, SiteMeter counts my own recent visits, and none of you vote on my polls enough to properly justify them. Still, it’s a great leap forward from even the summer. I’ve gone from just barely topping 100 visits a month in August and September to getting 100 visits in just the past week, and two straight months of over 300 visits. December has already topped November and it isn’t even over yet; the 400 mark, once unfathomable, now looks like a certainty.
I suspect a big reason for the boom has been Da Blog’s increasing emphasis on sports, especially football. (Specifically, I’ve noticed a lot of referrals from Google searches relating to the SNF Flex Scheduling watch. I’m the number 1 hit for “who will be flexed in week 17 of sunday night football”. If you’ve come in for the answer for that question, I’ll be live-blogging the Week 16 football day from my computer tomorrow.) With the college season proper over and the NFL season winding down, expect Da Blog to de-emphasize that in the first part of the new year. I hope to get back to taking care of my other projects, such as the 100 Greatest Movies Project. Later in the year, I’ll have a new way of covering the elections. And if anyone has any other non-sports interests they’d like to see represented, that would be hunky dory as well. During the past year, I also launched a web site, which will continue to grow and change in the coming year, including the addition of several new sections.
I’m going to be starting 2008 in two new classes and hope to get better focused on my classes, something my football-related projects have been distracting me from, and also work to make sure I don’t find myself kicked out of any classes, and thus kicked out of the university entirely. But I also hope to spend time in the second year of Da Blog to make it as memorable as the first.

NBC’s Sunday Night Football package gives it flexible scheduling. For the last seven weeks of the season, the games are determined on 12-day notice, 6-day notice for Week 17.

Last year, no game was listed in the Sunday Night slot, only a notation that one game could move there. CBS and Fox were able to protect one game every week each but had to leave one week each unprotected and had to submit their protections after only four weeks.

Now, NBC lists the game it “tentatively” schedules for each night. However, the NFL is in charge of moving games to prime time.

Here are the rules from the NFL web site:

Here are the current tentatively-scheduled games and my predictions:

Oh, and re-reading the AA post linked to on last week’s watch, I’m even more confused, and no longer certain what AA was thinking, because while Titans-Colts is listed as CBS’ “protected” game, Fox’s game is “GB-CHI”, which obviously isn’t being played at all – and was last year’s NBC game Week 17! But really, Jags-Texans is the only other real dark horse, although Vikings-Broncos might get thrown in for the heck of it. Even then, though, that’ll only happen if there isn’t a Favre to love because he wouldn’t be playing (which I doubt).

…of picking Hitler and Stalin.

And, of course, George W. Bush.

The web site is updated with the Patriots’ quest for 19-0.