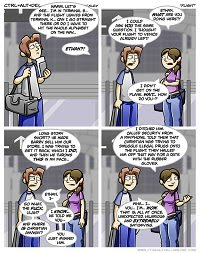 First, with the election approaching, for at least four of the next five weeks Tuesday will become webcomics day again on Da Blog, counting this post. Second, I’m linking to this post from here and here, so expect at least a slight bump in traffic.

With this apparent resolution, we can, presumably, all take a sigh of relief, and the Angst-O-Meter can come back down to 52%.

My frustration with Tim Buckley and the strip, however, is higher than ever.

Last time, I could have justified an Angst-O-Meter reading higher than the one I actually gave; this time, I could justify one lower than this, as there isn’t really much left to patch up. Zeke is still headless and Lucas still doesn’t completely trust Kate, but the main problem was always Ethan’s problems with Christian and Lilah. Those appear to have been taken care of, so for the moment at least, everything is back to some semblance of normal.

But the way things returned to normal, in a single strip, with a ridiculously expedited, bad-sitcommy, almost deus ex machina ending, that still does not sit well with me. Hell, this resolution is almost a single panel, and Buckley did such a good job of convincing people (well, me) that Christian’s words of departure were 100% correct that this resolution almost comes across as out of character. More to the point, it seems to prove CAD‘s critics right once again: the strip revolves around Ethan and nothing bad can happen to him for very long. The entire story arc may no longer represent a descent into First and Ten Syndrome, but only because it may have been turned into something far worse: the same as every other CAD story arc, only with a tease that it would be different.

If things immediately return to the status quo before this storyline it gives the impression that Buckley really is a bad sitcom writer who doesn’t really aspire to more than cheezy soap opera writer. If things immediately return to the status quo before the pregnancy and miscarriage, then people will pretty much riot. The only way for Buckley to save any face from this resolution – and there’s no way he can save face entirely – is for Ethan to realize he almost lost Lilah and perform some sort of soul-searching. But one of the points CAD‘s critics have long held is that real “change” is anathema to the CAD cast, especially Ethan.

The first time I ever wrote a post on Ctrl+Alt+Del, I said that the core of the strip and its popularity was not in being a gaming comic, but in being what Buckley called a gamer comic, in Ethan, Lucas, Lilah, and the rest, and their relationships. When Buckley performed the miscarriage, he said he wanted to “stress-test” what was in many ways the central relationship: that between Ethan and Lilah. I also said that too much emphasis on the “craft” elements of storytelling and art tended to miss the point and try for masterpieces when “kinda good” would do. Tim Buckley is hardly Charles Dickens or Rich Burlew, but he didn’t need to be. I was attracted because I became engaged in the plot, and because I wanted to see what happened next. I didn’t care about the accusations that Ethan was a Mary Sue or that he never really changed from being a manchild despite having impending changes that would require an actual adult to deal with. Those are nitpicks. All that matters, if you’re not going for the funny (which CAD is when it wants to be), is whether the plot is entertaining and/or compelling – no matter what era you’re in. And CAD passes that bar.

But this? This is insulting your audience. This is getting them emotionally invested in a story, wondering how Ethan could possibly extricate himself from this situation, if he ever did… and then pulling the rug out from under them, waving a magic wand, and putting everything back to normal.

I’m not leaving Ctrl+Alt+Del. Not yet. Let me at least see where Buckley is going with this. But this may be a situation where the right thing to say is “fool me once, shame on you. Fool me twice, shame on me.”