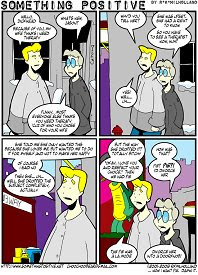 This is going to be a shorter review than some of my other ones.

Something Positive is funny in a way, because for me, it’s the opposite of xkcd. When I reviewed xkcd I started out doing a limited archive binge, and because I found myself with little to say, I decided to follow along with the strip at the pace it normally updates before reviewing it. It didn’t change my lack of anything to say, but that in itself was something to say. That incident gave me my policy of following along with strips for a spell before reviewing them, which has been taken to the point where I generally don’t necessarily archive binge anymore.

So with S*P, I’ve been spending the past few weeks following along with the strip, and when that left me with very little to say about it, I decided to go back to the beginning of last year and follow along on an archive binge. And at first, that didn’t change my lack of anything to say. At first.

Because I’m convinced Something Positive reads better all at once than as it updates.

Honestly, S*P is an odd duck to categorize. On the one hand, it’s a gag-a-day comic, and even there it’s a bit schitzophrenic. Sometimes it’s making commentary on geek culture, and when it does it can be hard to tell whether Randy Milholland hates geek culture with a passion, is in fact sympathetic, is one himself, or a combination of any or all of the above.

The flip side is when it’s a chronicle of the ordinary lives of its characters, and here, it oddly takes on elements of a storyline comic. Milholland is not shy about allowing his characters to grow, change, and undergo some form of character evolution. It’s tempting to compare it to Seinfeld or the like, but it’s different as well. Several characters have several ongoing plots, which move at a snail’s pace but still actually move. If there’s an appeal to the strip, it’s in waiting for all these plots to move while laughing at the geek-culture strips. It’s easier to appreciate all these shifts if you can read them in a single archive binge, where all the infinitesimal movements are less annoying, and a host of only marginally funny strips can have their humor add up and rope you into the strip.

Basically, the ongoing plots are the most compelling element of the strip, but they move incredibly slowly, so if you don’t have much patience at all that shouldn’t be a reason you follow S*P. Conversely, if you find the geek humor funny you might decide to read it for that reason, but because of the plots that humor isn’t as common as you might like and isn’t always as funny as it should be.

And Milholland has a lot of characters and a lot of plots. It’s even more daunting, and potentially confusing, when fairly minor characters get significant screen time and their own plots largely independent of the (nominal) main cast. During my binge I often had a hard time keeping all the characters straight. (How many red-heads does Milholland have in his cast anyway???) Milholland has a fairly prodigious cast page (though it has some gaps, including Aubrey, who you’d think would be first in line to get an actual page considering she’s one of the original three cast members) but it leaves me with the impression that Milholland has spent a little more time than you’d expect with characters whose connection with the main cast was always a little thin in the first place. (Mike would fall into this category.) This may have something to do with who the fandom has latched on to, but still. And these are just the ones Milholland maintains plotlines for; there are boatloads of other characters that only show up at “Old Familiar Faces” time.

I also have a little bit of an issue with the art, although I think I have more of an issue than I otherwise would with Milholland’s text-laden panels (which Ctrl+Alt+Del is so criticized for) and irrelevant art because recent strips that happened to fall within the time I was following it hammered home the point for me. Two strips in particular, one of which saw a last-minute script swap-out and the other one of which Milholland just couldn’t decide between two scripts. In both cases, the art is exactly the same in both versions. Seriously. Milholland basically could take any four panels of Davan and Aubrey talking and plop in whatever dialogue he needed. He could create the new Dinosaur Comics, even! And they’d probably go on and on about whatever their problems were and how to fix them and some snarky remark and… and there are quite a few strips where the dialogue could be swapped out for something else! It’s tempting for me to ask “why make a webcomic if the art doesn’t matter? Why not go into prose?” but that would disqualify half of webcomicdom, including Dinosaur Comics, which is beloved partly because the art doesn’t matter. (On another note, be sure to check out my webcomic!)

I don’t think I hate Something Positive nearly as much as I’ve made it seem in this review. I can certainly imagine it being an enjoyable diversion for someone, and I did have a few laughs and found myself constantly clicking the “next” button wherever I was in the archive, but I’m not sure I can completely endorse it either. I don’t want to say it’s mediocre at best, but I think I do have some deal-breaker problems with it, or at least a series of smaller problems stacked one on top of another that mixes with just not being quite compelling enough. But I think my state of mind is affecting my judgment here, because of all the stress I’ve been under recently, and because of that there will be no webcomic post next week so I can recharge my batteries, catch up on past stuff, and allow my next webcomic post to be on Order of the Stick so I can stick to a realm I’m comfortable in and already know what I’m getting coming in.