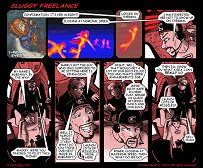 (From Sluggy Freelance. Click for full-sized lots of missiles.)

I have a big beef with Pete Abrams of Sluggy Freelance fame.

I mean seriously. A big beef. Sluggy is one of the oldest webcomics on the Internet; it and User Friendly are the elder statesmen of webcomics, dating back to 1997. When I mentioned Sluggy as a representative of the sort of “wacky stuff happens” comic that makes up one of the two major branches of webcomics, counterpointing Penny Arcade‘s role for video game comics, back in my initial round of webcomics posts, I mostly mentioned Sluggy because it was the best representative I could think of and I couldn’t really think of whether there even was an equivalent to Penny Arcade. It turns out I may have been closer to the truth than I realized. Sluggy was perhaps the pioneer for Cerebus Syndrome in webcomics, and it got an early enough start to be a big influence on the “wacky hijinx” webcomics to follow. It’s not as nearly-mainstream as PA, but it’d be hard to find a webcomic more influential on more top webcomics.

But it’s as old as User Friendly, and if reading UF in 2006 monopolized my time and caused me to fall behind on things that actually matter, well, Sluggy has over two years’ worth more of strips now. And it’s more important to know what happens in them, because this is a far more continuity-laden strip than UF. Chances are that a given strip will contain at least one reference to a previous strip in a pink bar beneath the strip, showing just how interconnected Sluggy‘s mythology is. So it’s really critical that Sluggy eases the transition for new readers who want to join the Sluggy phenomenon but don’t have the time to read 12 years’ worth of strips.

Sure enough, look at the front page of the Sluggy site and it entreats you “New viewers, click here to view the Sluggy viewer’s guide!” And how does this “viewer’s guide” get people acclimated to the comic? By providing some sort of summary of the story so far, like Girl Genius or The Wotch? No, silly! By suggesting three potential jumping-in points to start reading: the beginning, “the sci-fi adventure” (a Star Trek/Aliens parody that wound up introducing Aylee to the strip) and Torg’s frolic into “The Dimension of Pain”… and both of these latter storylines take place within the first year. (Or you could just read the Torg Potter parodies separately, but where’s the fun in that?) Welcome to Sluggy Freelance, newbies! You want to skip some strips in your archive binge? Here, we’ll let you skip less than a year of a twelve-year run! Read at your own pace; we’re willing to wait a year or more for you to catch up to the current strips if you need it! Have fun!

Does Abrams provide anything else to get new readers acclimated to the strip other than an insultingly small head start? No! There’s not even so much as a cast page – Eric Burns(-White) won’t like that (2004-5 vintage Eric Burns, at least)! You’re pretty much stuck reading most of over 4000 strips! Have fun, kids, you’re on your own!

I get the feeling that at this point, Abrams is perfectly content writing for the audience he already has, especially since, as he’s been focusing on the “megatomes” there haven’t been any books collecting any strips after 2002 (only five years into the strip’s run), so his Defenders of the Nifty program has become an increasingly important source of income. Abrams has one of the larger fanbases of any continuity strip, so it’s very tempting to coast and not make things easier for it to grow, and be content with what he has.

This strategy may be doomed to failure. A recurring topic over the last month at The Floating Lightbulb has been looking at Google Trends data for various webcomics and webcomic sites, and a noted trend of various diverse comics declining – and Sluggy has been no exception. One of the many proposed theories has been massive archives scaring off potential newcomers to continuity strips, and there’s no archive scarier than Sluggy. I compared Sluggy to four other leading continuity comics, and the only one declining faster than Sluggy is Megatokyo, which is infamously anti-new-reader in its own way. (Order of the Stick and the rest of Rich Burlew’s site has lost half its audience since the start of the tracking period, but it’s so much further ahead of the rest of the field, only now falling to Megatokyo‘s audience at the start of the tracking period, that it’s hard to make a fair comparison.)

Perhaps the forumites could get together and create a short “cheat sheet” of a thread for new readers, or the Defenders could get together and create an officially sanctioned Sluggy wiki, or something. They can still read through the archives “at their own pace” but at least it’s easier to understand the current strips at the same time (which will help in getting them through the past strips). But no. Instead new readers are probably going through the current storyline wondering “who – or what – is Oasis and why should I care?” And they’re going to go back through the links in the pink bars, and those are going to lead them to strips that pose more questions, and they’re going to want to go back to more strips that provide background for these strips… only they won’t be able to because beyond the current storyline, those bars are (presumably) hidden behind “Defenders InfoShields” – they’re For Defenders’ Eyes Only.

Quick tip, Aspiring Webcomickers Everywhere: putting extraneous yet useful or at least appealing stuff behind a paywall? Good. Putting stuff that makes things easier for new readers behind a paywall, especially when it’s one of the very, very few bones you throw to new readers? Bad.

Meanwhile, your existing readers aren’t much better – it’s hard to remember twelve years’ and 4,000 comics’ worth of material, certainly hard to sort through it, so every bone you throw to new readers is also a bone you throw to your existing readers. (Which may help explain putting context links behind a paywall, but doesn’t justify it. Not that I’m asking Abrams to change that if he doesn’t want to.) Existing readers have the additional burden that Sluggy doesn’t have an RSS feed, a trend which, by the way, I actually understand a little bit: RSS is newer than its actual age would suggest, if that nade sense. In 2006, freshly moved into the dorms, I hunted around for a newsticker that would best emulate a TV news ticker and could be used long-term to keep me posted on the news, and settled on this. On its creator’s most recent post on his own blog (dating to… 2006!) he wonders what it might take for RSS to go “mainstream”, and suggests that some sort of RSS “killer app” (he suggests so much so that it would become synonymous with RSS and become a genericized trademark, so only geeks would know the technical name) might be the solution. I would propose that the release of IE7 (later that same year) and its internal RSS reader may have at least in part served as just such a “killer app”. Until then, I suspect a significant number of webcomics creators, certainly much of the general public, had barely even heard of RSS.

Sluggy deserves every ounce of praise it gets; I sometimes found myself looking at various points in the archive and reading significant stretches with interest. (Granted, they were mostly fairly early when the strip wasn’t as laden down with mythology, and a lot of the time it was to look at or for Aylee in one of her humanoid forms, but still. Yes, I really need a girlfriend.) And I’m intrigued enough by the current story arc, which promises to be a milestone one, that I’m planning on keeping on reading Sluggy until this arc’s conclusion. But I don’t have much of a reason to keep reading Sluggy beyond that. With my overcrowded schedule, I just don’t have time for another strip that demands an Order of the Stick level of attention, certainly one with so massive an archive, so much of a need to comprehend all of it, and so little help in doing so.