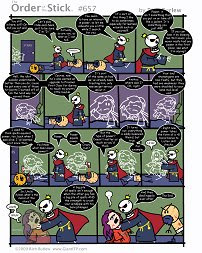 (From The Order of the Stick. Click for full-sized second chance(s).)

I was all set to have a nice, enjoyable weekend where I could focus on finishing off some assignments for one of my classes, and you had to go and put up this whopper last night.

Uncharacteristically for this comic, and perhaps to its detriment, it engages in a bit of moralizing, but it’s all to further the greater goal. In the end, V’s real “ultimate power” may come without saying any words at all. This is a major moment in the story of V’s character, on par with taking the soul splice in the first place.

V really learns two lessons here, both related in a way, and they’re both put into stark comparison with each other in this strip. The one Xykon preaches to him is how quixotic V’s quest for “ultimate arcane power” really was all along, how one-dimensionally V saw power, how it ultimately wouldn’t ever be enough, and against someone who really grasped power, wasn’t enough. This seems to both support the idea of the soul splice representing the Four Words, though perhaps for unexpected reasons, and suggest that if it wasn’t, then when the prophecy eventually does come true it’ll come with a twist. (“I’m going to multiclass.”)

Hmm. Maybe the real four words were “My power EXCEEDS yours!”

The other lesson provides the forces of good’s response to Xykon’s characterization of power, and if anyone here is likely to vocalize it it’s O-Chul. It’s this lesson that V takes to heart in her holeside epiphany. Some forumites, before this strip, suggested that V’s run-in with Xykon showed the value of teamwork (after all, Redcloak and Tsukiko did most of the critical dirty work), but what V learns here is slightly different – baby steps, perhaps – and more fit to her situation. It’s learning not to think entirely about himself all the time. In that one moment, V realizes there’s a greater good going on here, and while self-preservation may mean resuming getting out while the getting’s good, the right thing means letting someone get a few more licks in on Xykon. In an odd way, while forum speculation for a while suggested that V and Belkar marked a study in contrasts as they flipped places on the alignment scale (one half fake, but still), the real contrast may be that while Belkar is faking character development and becoming a team player, V is getting the real thing. Maybe they could become real buddies now.

(It’s also worth comparing V to his good friend Haley, who recently said she “takes responsibility for her own actions,” defending why she wouldn’t crack down on Belkar at all. In a way, it makes perfect sense that if V was going to make friends with anyone it would be Haley with their respective look-out-for-number-one tendencies. And now, both are starting to grow out of those shells in varying ways.)

It’s here that V gets her redemption from his failure from earlier. Out of spells and trying only to make it out alive, V indirectly caused the death of several fleeing soldiers as the Battle for Azure City was drawing to a close. When this was revealed, it may have seemed a hastily-conceived way to explain V’s apparent character derailment in the 500s (check out that book V’s holding at the end). But this is an almost identical situation, except here V figures out how to pitch in without any spells and while putting himself at great risk.

The rules of story indicate O-Chul pretty much HAS to get some major damage in against Xykon now. Imagine this scenario (rather plausible without the early plot holes): O-Chul kills Xykon, returning the favor V just paid him, but doesn’t finish off the phylactery. Vaarsuvius and O-Chul leave, but for whatever reason don’t take the Monster in the Dark. Patrols come around, and while Vaarsuvius is powerless to hold them off, O-Chul isn’t. So, V gets out alive no matter what he did at the hole in the wall, but by doing something for the greater good gets someone else to help him out and actually comes out better in the deal. And suppose they subsequently find the Resistance – V gets a chance for some further literal atonement for her failure from earlier. It may have ruined the reunion of the Order, but taking off to fight Xykon may prove to be the best thing to happen to them, and to Vaarsuvius.

1 thought on “What does it say when you learn moral lessons from Xykon, and he’s RIGHT?”