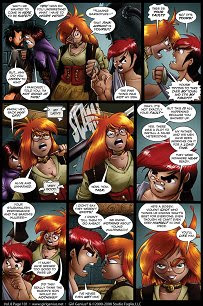 (From Girl Genius. Click for full-sized discussions of idiocy.)

This post, like the last one, has nothing to do with politics or voting, so if you just came in yesterday and you have no interest in this sort of thing, just skip past it. If you’re the sort of person who only ever came to Da Blog for the webcomic reviews, I have an OOTS review down the pipe for next week – which will essentially be a moment in time; I’ll recap my thoughts on the past few strips, probably running through #600 – and that’ll be it until the week after the election.

Phil and Kaja Foglio are miniature Gods of the webcomic community for their decision to switch Girl Genius from a print comic book to a fairly standard full-page webcomic – a decision that implicitly validated the webcomic form as a viable form, and which, to hear Phil tell it, partly came out of a feeling that the Internet was a good business model for comics and partly out of a financial crunch.

But what Phil and Kaja actually did was take the stories they were already writing for the comic book and just release them page-by-page to the web. The result shows, as the strip is rather clearly plotted with the comic book in mind, and there are some strips that make little sense on their own, including at least one splash page. A splash page that leads to another strip that tells us little that we didn’t learn in the previous strip. While following Girl Genius for the past two weeks, I often found myself looking back at the previous strip to see how we got to where we are in this strip. In essence, Phil and Kaja are still writing a comic book, not a comic strip – or rather, are writing a graphic novel rather than a comic strip.

It’s almost like, somewhat appropriately, in Victorian days where writers like Charles Dickens would publish chapters from their coming novels in serial forms in popular magazines – only that really describes the model that has seemed to be the status quo in print comic books, and what Phil and Kaja are doing is to release their novel a paragraph at a time. What I’m trying to say is, the result is rather awkward. When you have different media, you have different expectations and mechanisms for moving the story forward, and the Foglios are using a… different mechanism to say the least. Not that I fault them for doing so – that’s what they set out to do, and especially given the serious nature of the subject matter, they can’t be expected to change to a more episodic form. And they have certainly adjusted their style from the print comics, pages from which have been assigned what appear to me to be arbitrary dates and placed in the archive. Read from the beginning and it’s obvious this was never intended to be released in an episodic form – the story establishes itself too slowly. That’s why most webcomics start with a strip-a-day format and undergo Cerebus Syndrome later.

If there’s any strip that has managed to balance the episodic format of the web with the coherent storytelling of the print format, it’s – guess who! – Order of the Stick. Every strip is a coherent strip in itself, with its own gag wrapping it up, yet also makes sense as a page in a larger book. To pull this off, Rich Burlew will sometimes release multiple pages at once as double or even triple pages, and is flexible enough in the format that he’ll even pull infinite canvas techniques that would be difficult to pull off on the printed page. The Foglios would benefit from double or triple strips on occasion, but that would increase their workload as they’d then have to complete another page faster.

It’s just that I’d be a bit amazed if – as, paradoxically enough, I suspect they do – they had an audience that was much more than just the people along from the print comics, especially ones that hadn’t already taken the massive archive binge, as the pace of the story and the incompleteness of the fragments would likely turn anyone else off from trying to follow it day-by-day.