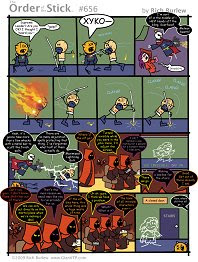 (From The Order of the Stick. Click for full-sized doors! Why did it have to be doors!)

There’s… a lot of stuff going on here. There’s so much going on that I even have more titles than I know what to do with.

First, a lot of the thinking I had in mind for what would happen after #653 is completely busted. Rather than a lot of talking, we got an action sequence. Truth be told, I probably should have done a post on #655, which was pretty weighty in its own right. So let’s see, Redcloak loses an eye and Xykon’s on the verge of losing his phylactery to someone who was a complete no-name before the current book. That’s not an important strip to pay attention to at all.

Yes, I am going to fulfill the April OOTS post I owe you, only with a week left in May. That was a brilliant strategy, wasn’t it?

So in order of what happens in this strip: See those X’s in Panel 2? So Jirix was worse than a background character, but may have saved… someone’s life. As we’ll soon see, possibly not Xykon, maybe Vaarsuvius, but perhaps most likely is just ruining O-Chul’s.

V still has at least a couple of spells left. That screws up some of the thinking that I, at least, had in mind.

Xykon’s phylactery is loaded with protections, as we find out the first time someone tries to break it… which probably suggests Xykon was not as close to being destroyed in the tower as we were once led to believe. So what happens when the time comes to actually break it near the end of the story? Or does Xykon actually survive the end of the story?

Third-to-last panel almost seems designed to address some of the more out-there and deus-ex-machina theories held by forumers… so why do I think it’s going to lead to forum speculation about Qarr popping in despite very little for him to do?

Cleverly, O-Chul’s last panel in this strip is him at the exact moment of him getting hit with the lightning bolt, and it’s clear in the last panel that he’s down, but we not only don’t see him we don’t even see Xykon. Is he dead? Negative hit points? Zero hit points? Even in positive hit points but too weakened to go on?

And now what happens? It would be stupid for someone to just crack open the door and render this little dilemma moot. Does V stick around for a while in the room or something? Does he hop out that huge hole in the wall, if that would be effective in any way at all other than getting a lot more scratches? Maybe Qarr really does hop in and do something? V ain’t gonna die here, because if she was she would be dead already… unless Xykon’s dealing with O-Chul has its own impact, like turning the MitD against him? It’s like Rich is playing chess with his audience!

And what about the rest of the book? We have at least one more strip of V running around like a chicken with his head cut off, that’s 657. Possibly a second, but I could at least see us moving on after the next strip if the circumstances are right. Then we have to zip back over to the main body of the OOTS for the return of Roy. That’s at least two, maybe three, strips. We need a strip for Roy himself to make his triumphant return, then at least one strip to assess the situation, and maybe a strip for looking forward or to serve as transition. That takes us to 660 when you combine the two maybes. Heck, maybe the OOTS will even meet back up with Hinjo and his group.

Because it doesn’t look like we’re going to get the exposition I anticipated for this stretch, you might think that means we’re using fewer strips. And you would be wrong. We’ve already burned two in the tower for different reasons than I anticipated. We have a bunch of establishing shots to burn as well (such as where Redcloak went and what V’s doing), and if the Linear Guild is going to show up in this book we need to see them soon. That’s a minimum of two (the LG and the end-of-book montage) and probably more, taking us to 662 or more.

An average of the last two books’ duration would suggest that the current book will end at or around the auspicious number of 666. We don’t have a lot of strips to answer all the questions that are best answered in the current book. Where do the OOTS go from here? What’s the Linear Guild doing? What will V do if and when he escapes? Are Xykon and/or Redcloak affected by these events? Where did Redcloak go with that Word of Recall? Will Roy tell off Celia? Will the OOTS replace V? How did Redcloak know about soul splices and will V find out? Is there special importance to the island both the Sapphire Guard and OOTS wound up at? Is the sky blue? Is grass green? All that and more, tonight on a very special episode of the Order of the Stick!

So this post isn’t quite as long or in-depth as I originally had in mind. Again, Rich kind of ruined things by going as far away from the exposition as possible. I can’t help but shake the feeling I’m forgetting something by rushing through this post, on either end of it. But at least in my own mind, I’m fulfilling my end of the deal, and that’s all that matters.

2 thoughts on “Oh, I’m close to coming up with my own solution to the draft-image-upload situation. Very close indeed.”